THE GAME OF GO

The game of go, also known as weiqi (圍棋) in China, baduk (바둑) in Korea and igo (囲碁) in Japan, is prolific in my art.
I started playing go in 2004 and quickly became hooked. It is amazing how something as small as a board game can have such a big impact on your life: thanks to go I have traveled the world, have been employed in go-related institutions and met my girlfriend. Go also gave me the artist pseudonym Murugandi.

MY INVOLVEMENT IN THE GO WORLD

As time passed I played more go, participated in tournaments in Europe and Asia and became better at the game.
In 2010 I studied go in Wuhan, China, for three months under professional go player Yan An 7p. After I came back, I quickly reached my current level of 4-dan and became a member of the Dutch team for the Pandanet European Go Team Championships.
I started making go commentary videos in English for EuroGoTV with Harry Weerheijm and this became a well-watched series on YouTube. In 2012 I started BadukMovies with Peter Brouwer, a website for which we made a total of 212 tutorial videos: a new video every week until July 2015. Around the same time I was an employee in Chess and Go shop Het Paard, one of the major go shops in Europe. In 2015-2016 I started writing news articles, first as a European correspondent for the American Go E-Journal and later for the European Go Federation. In 2017 I compiled and wrote the 2016 European Go Yearbook, a compendium of 576 pages on go in Europe in the year 2016. In 2017 I started working for the European Go Cultural Centre in Amstelveen, one of the overseas go centres of the Nihon Ki-in (Japanese Go Association), where I organised international go tournaments and events until the centre closed down in January 2020. In February 2021 I helped Artem Kachanovskyi set up the European Go Journal, for which I was the designer and lead-proofreader until its November edition that year. Currently, I am writing a series of go books for the Kiseido Publishing Company with Peter Brouwer, titled Weird and Wonderful. Volume 1 is subtitled Extraordinary Moves by Professional Go Players and was published in January 2022.

I have been teaching go since 2010, both online and offline, and have had students all over the world. If you are interested in taking lessons, please send me a message.
You can read an interview with me by the European Go Federation here, about the 2016 European Go Yearbook and its writing process.

Over the years I have made lots of art that is go-related. Some of it was created spontaneously, inspired by the names of go shapes that refer to animals, but the majority of it is commissioned work. I am grateful to the go community, a tight-knit community of enthusiasts who share their passion for this amazing game, mind sport and art.

My go art has been used as logos of go associations, has been gifted as tournament prizes, has been hung in go schools, has been printed on the covers of go books and more. Below you will find an overview with short descriptions. If you want to know more about the context and background of these works, have a read on the go category of my blog.
​
Want to support me? All of these artworks are available in my Etsy shop as posters and postcards. If you want me to make a go-inspired logo, drawing, banner, thumbnail, you name it, please send me a message or leave a comment on my blog.

These are photos of some of the originals of my go artworks, made with pen on paper. Many of these originals were scanned and digitally altered, resulting in some of the artworks shown above. Most of these originals have been sold, with the exception of the penguins, owl, ring-tailed lemur, giraffe and panda. If you are interested in buying an original go drawing from me, or commissioning one, please send me a message. 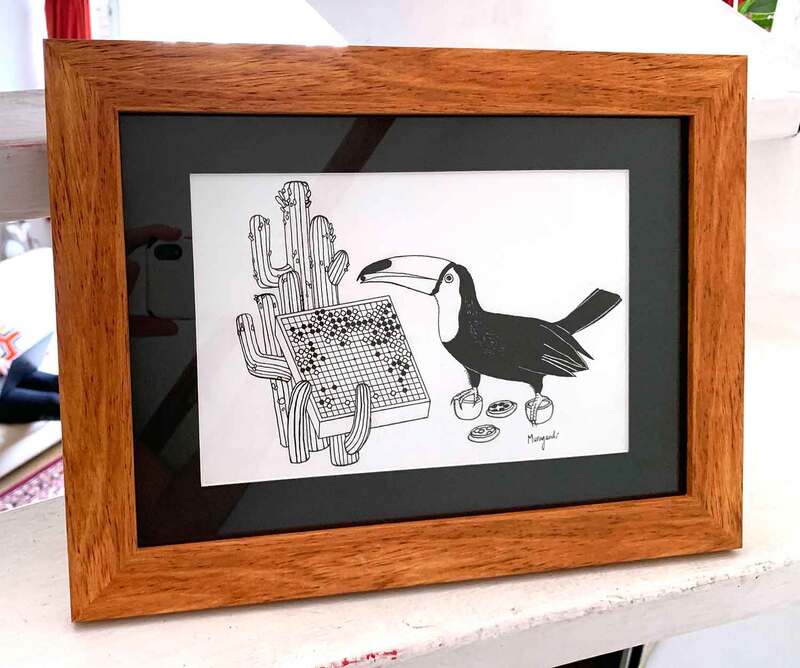 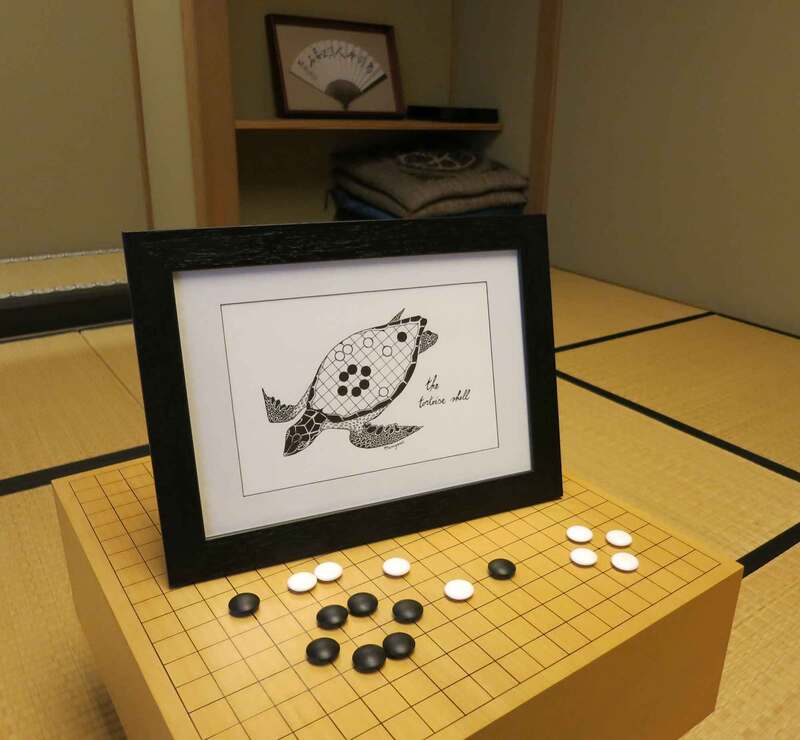 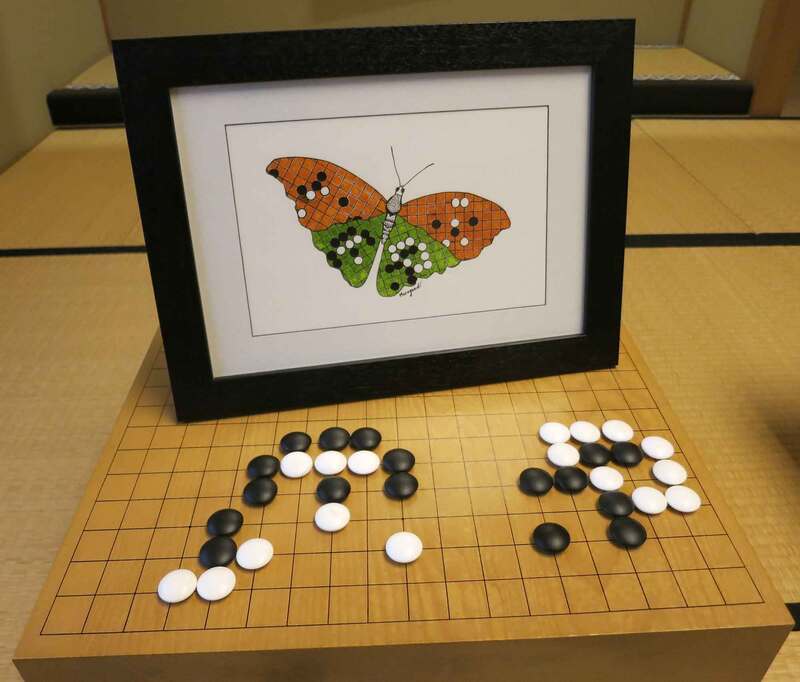 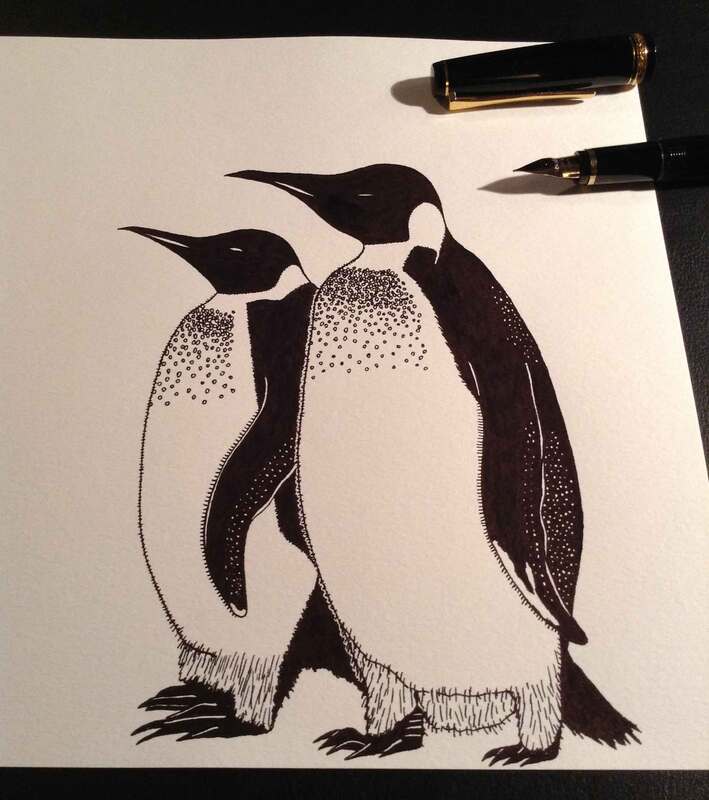 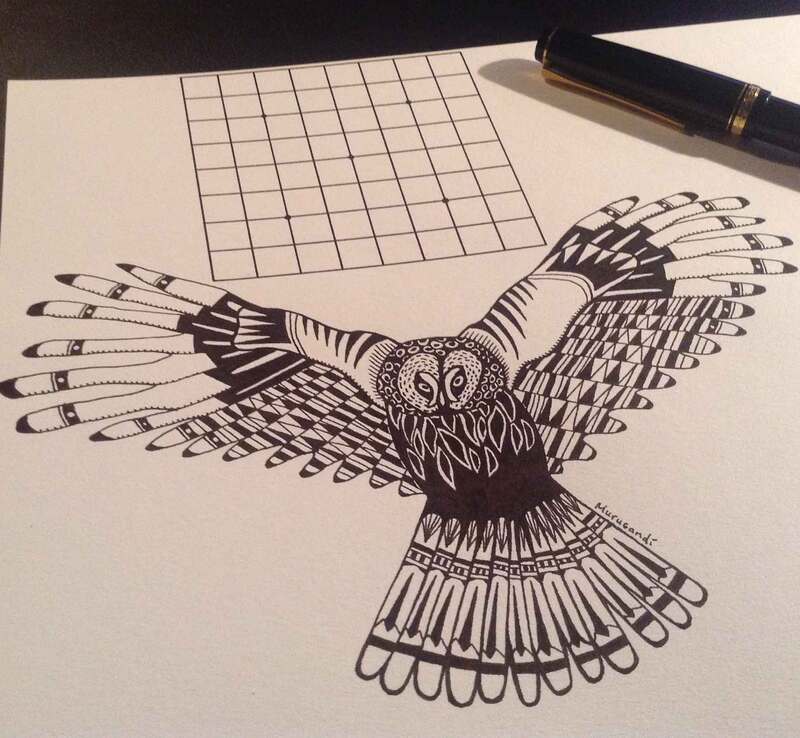 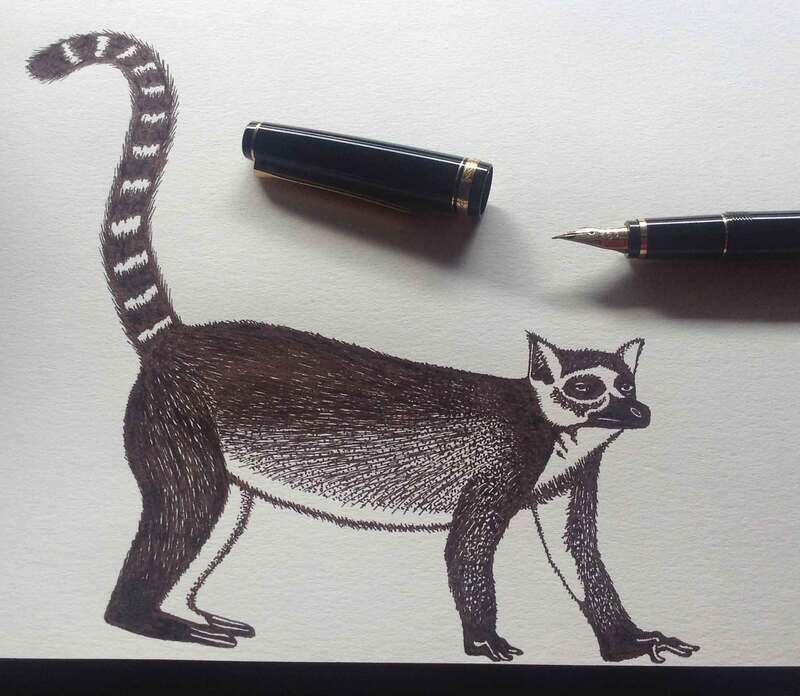 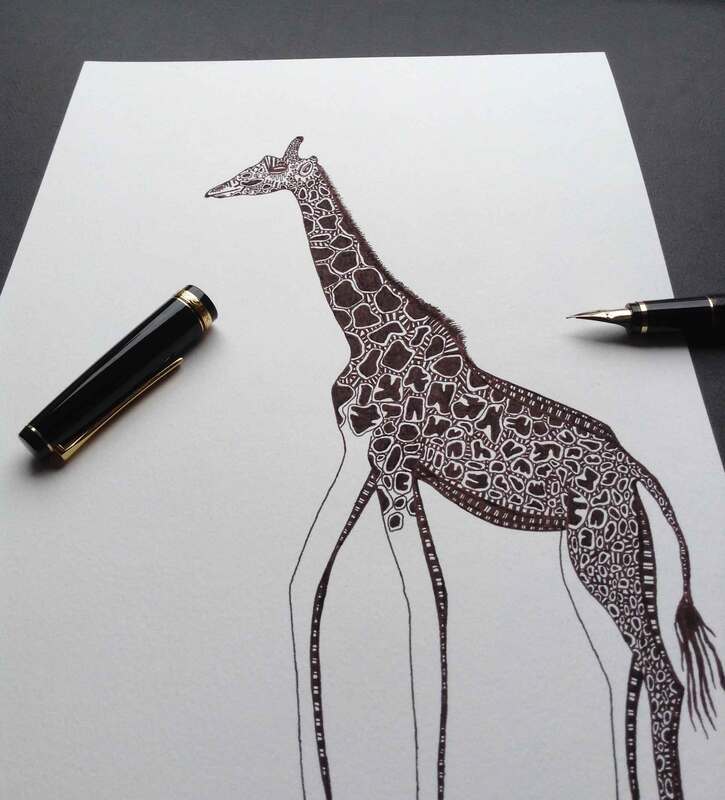 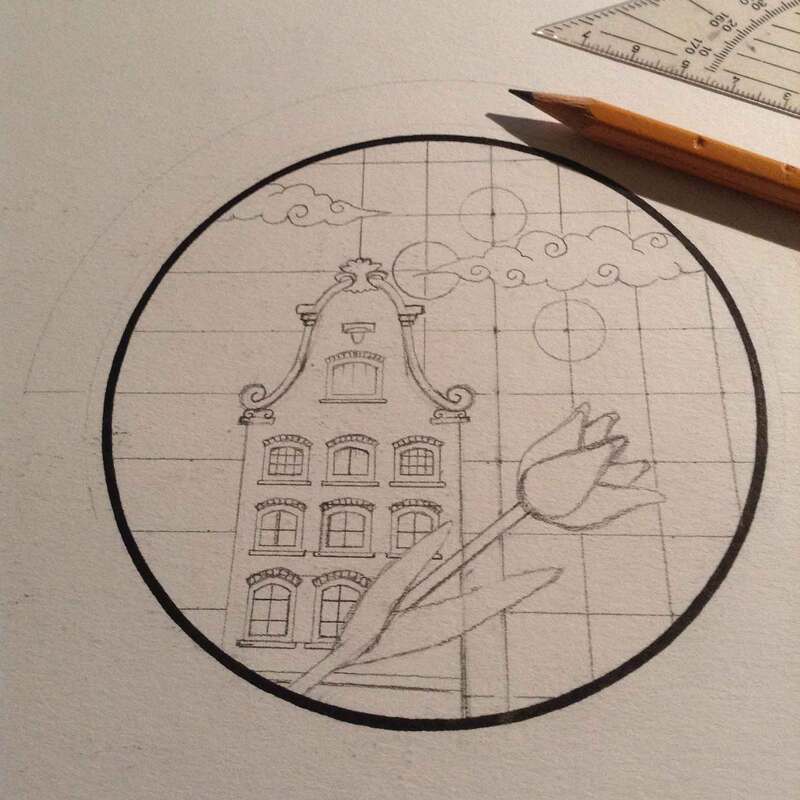 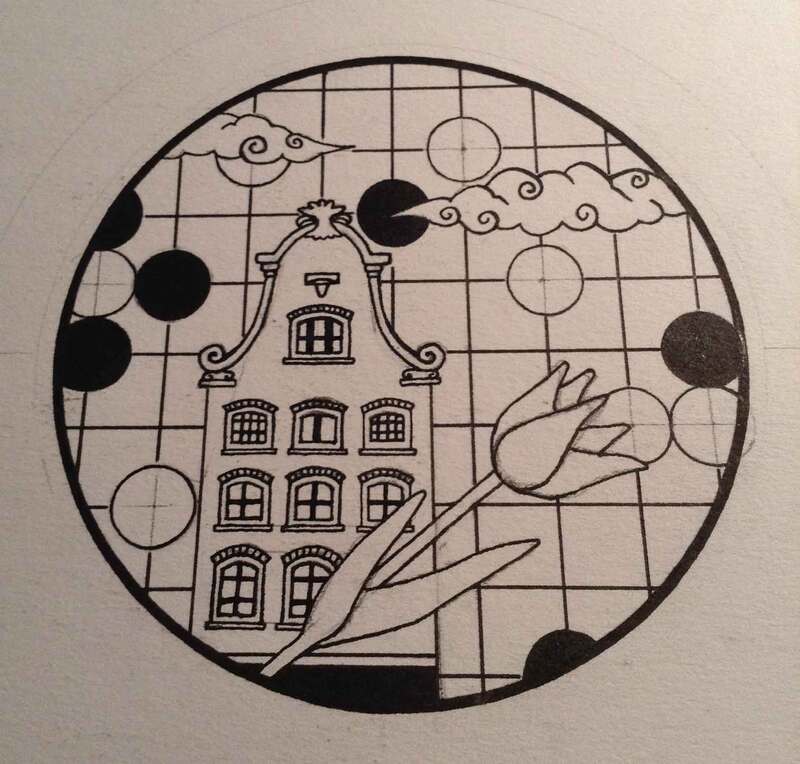 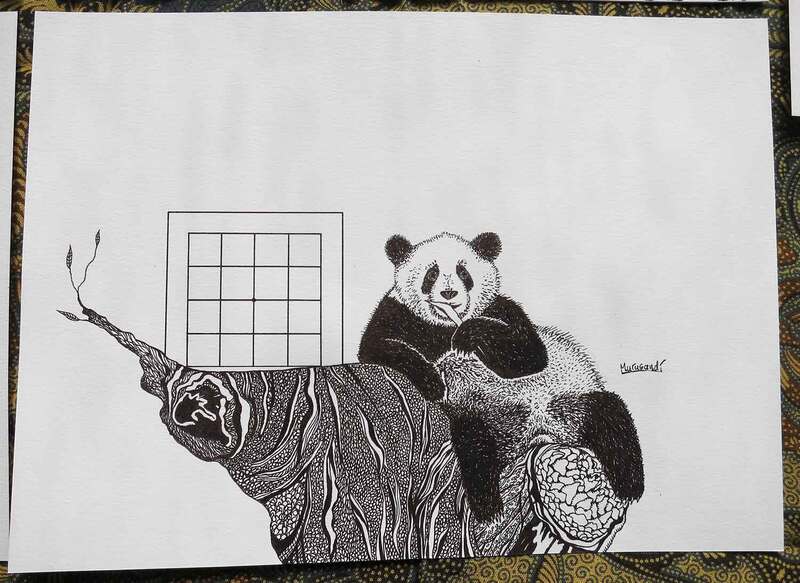 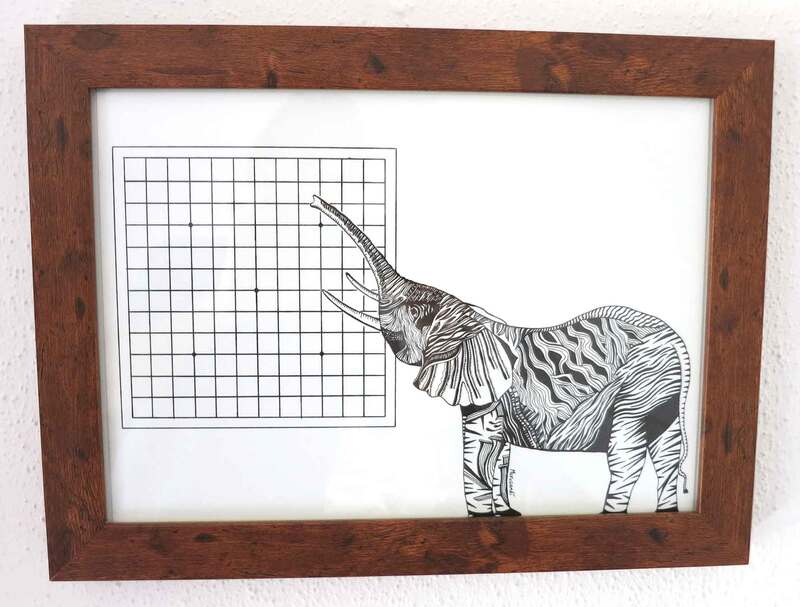 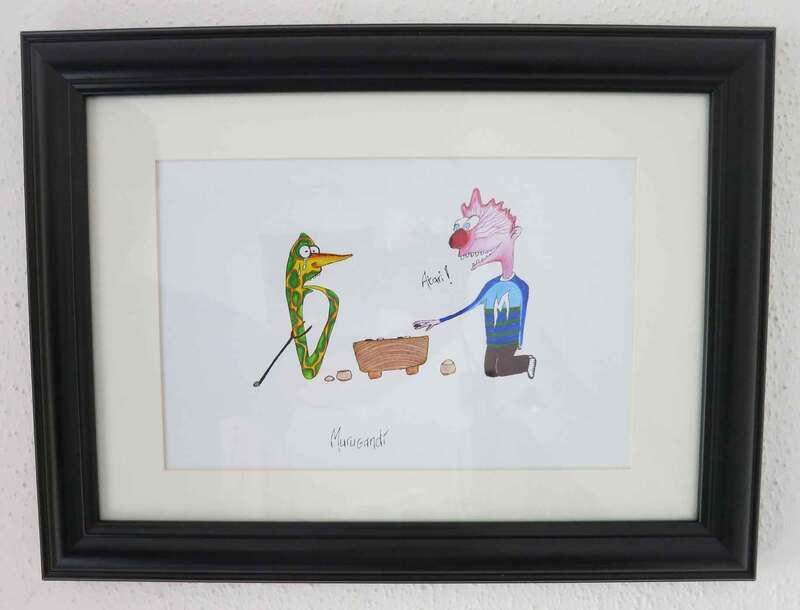